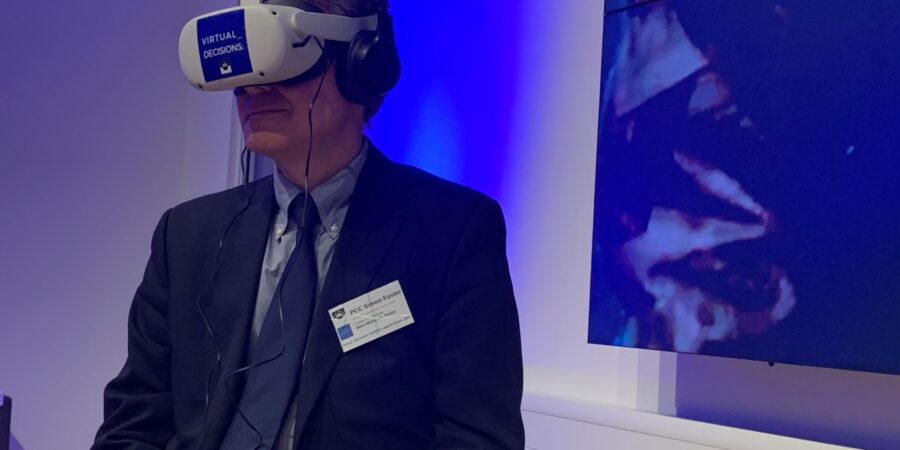 A Birmingham based creative arts company, West Midlands Police and the region’s Police and Crime Commissioner are to launch a new interactive virtual reality film that aims to help tackle knife crime.

Working with police officers the award winning Round Midnight has made a new educational virtual reality programme that allows viewers to make decisions about knives that determine how the story ends.

The film, which is called ‘Virtual_Decisions: KNIVES’, and the virtual reality equipment has been funded by West Midlands Police, the West Midlands Police and Crime Commissioner and the Home Office. It will be ready to launch in schools, on 29th September.

The educational tool will help illustrate the consequences of the decisions young people may be forced to make when it comes to knives.

Knife crime has been rising rapidly across the country and has more than doubled since 2012 in the West Midlands.

The new film about knives follows the success of Round Midnight’s previous film about gang culture and criminal exploitation called ‘Virtual_Decisions: GANGS’.

The new film explores the reasons why many young people carry a weapon and what the consequences of this might be.

Once the participants have completed the 11-minute virtual film, they then take part in a specially designed creative workshop that explores their decisions and the consequences of their actions, allowing for an open and honest discussion.

The virtual reality in Education programme was first trialled in three schools in July, including Hamstead Hall Academy in Handsworth Wood, Greenwood Academy in Castle Vale and Ormiston Sandwell Community Academy in Oldbury. The three schools also provided the actors for the knife film so have been involved in the production. A second trial will take place in five schools in the Lozells and Sparkbrook areas of Birmingham this September.

The West Midlands Police and Crime Commissioner, Simon Foster, said: “This is a really innovative project that I hope will appeal to young people.

“Knife crime has been rising across the country for around 10 years and I hope schemes like this can capture their imagination and help reverse the trend.

“We have to make it clear to all young people that they have a choice and that carrying a knife makes it more likely, not less, that they will be hurt.

“The money I have used to help fund this project is proceeds of crime that has been seized from criminals.”

Sami Cornick, development manager at Round Midnight, commented: “We have seen that using theatre and virtual reality helps educate young people on important subjects and has resulted in real change, so we are really pleased to be working with West Midlands Police on such an important issue.

“Our virtual reality GANGS programme worked really well so we know educating children on these social issues can help them throughout their lives by showing them how to make the right decisions.

“Also, the way this has been created means that hopefully this can be rolled out across the UK, with other police forces, neighbourhood police units, in schools and in prison services as part of rehabilitation programmes.”

Lucy Kirwan, temporary Chief Inspector from West Midlands Police, commented: “It is essential that we educate youngsters on the dangers of knife crime as too many people see carrying a weapon as their only option and too many lives are being lost.

“The Round Midnight team has created a really engaging way to educate young people on social issues that could have a real impact on their lives.”

Round Midnight has worked with Professor Peter Langdon from The University of Warwick who works in the Centre for Educational Development, Appraisal and Research to create the VR videos and the supporting workshop materials.

Peter commented: “Round Midnight’s Virtual_Decisions Universe is providing a real solution to help with some extremely serious social issues. Educating our children in this way shows them the repercussions of their decisions and actions and it has the potential to help save lives in the future.”