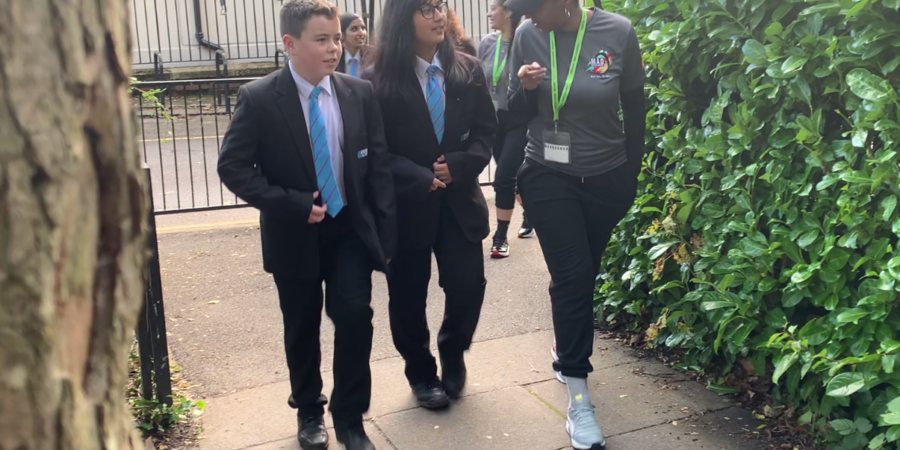 A new scheme has been launched in Birmingham to help keep children and young people safe on their journey to and from school.

The Step Together project has initially partnered with Erdington Academy in Birmingham and will see youth workers based along routes to school, acting as trusted adults and a point of contact.

Their job is to de-escalate potential violence and to build positive relationships.

Schools, young people and community members have helped to identify where along the route the youth workers would make the most difference.

Whilst the scheme is launching in Erdington, seventeen other routes across the West Midlands will also open in the near future and will operate until the end of the school year.

The Home Office and the Youth Endowment Fund are investing £1.2 million in the project to test if this approach increases safety, as well as improving attendance at school. If successful, other schools around the country may also adopt the scheme.

The schools that are taking part are all keen to be proactive and to tackle the early signs of harm, before violence occurs.

The West Midlands Violence Reduction Unit is a multi-agency unit that includes local authorities, education, health, youth, faith and community groups as well as the police.  All of these partners have been involved in bringing Step Together to the West Midlands.

The Violence Reduction Unit is funded by the Home Office and is hosted by the Police and Crime Commissioner. It was launched in late 2019 to help organisations work together effectively to tackle the root causes of violence.

The West Midlands Police and Crime Commissioner Simon Foster, said: “Preventing violence and keeping young people safe is exactly what the Violence Reduction Unit is all about.

“Every pupil has a right to walk safely to and from school and I hope this initiative will help them do just that.

“I’m delighted to jointly launch this project and help get more youth workers back on the streets to support our young people.

“Preventing violence reduces the number of victims, which is what we all want to see.”

Minister of State for Crime & Policing, Kit Malthouse, said: “School is where young people should feel safest, and everyone deserves to be able to travel to and from school without the fear of violence.

“We are proud to support this Step Together project, which will safeguard key routes to and from schools in the West Midlands area to help de-escalate potential violence and to build positive relationships with pupils.

“Our Violence Reduction Units work with police, schools and local authorities to help young people fulfil their potential and lead futures free from violence, and we hope to roll out this pilot pioneered by the hard work of the West Midlands Unit across other areas in the country.”

Whilst Simon Mallett, who is the Head Teacher at Erdington Academy, said: “We’re delighted to work closely with the Violence Reduction Unit on this project.

“We know violence and intimidating behaviour can, on rare occasions, occur on any walk to and from school, so to actively take steps to prevent that from happening in Erdington is a really positive step.”

One of the organisations that will be funded by the VRU to provide youth workers for the project is MAD Birmingham. It’s Operations Director is Tom Mcintosh, he said: “At MAD Birmingham we believe young people have the right to feel safe, which aligns to the outcomes of the Step Together project and allows us to work together to support young people to feel safe and make positive choices.”

The Youth Endowment Fund is contributing more than £400,000 to the scheme. Its Executive Director is Jon Yates: “Too many young people in the West Midlands live in fear of violence.
“Step Together is an important project with the potential to change things.

“We hope that we can learn from the early work being done right here in the region, and potentially work to expand the scheme to other areas of the country.”